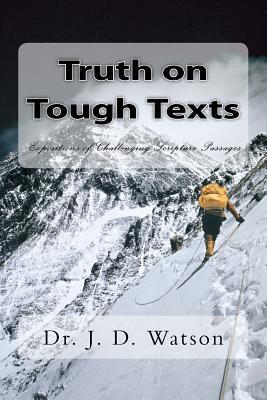 The chapters originally appeared in the monthly publication, Truth on Tough Texts, which was launched by the author in August 2005. They reappear here so that they might reach a wider audience. Just a few of the dozens of topics addressed in this anthology include: Was Matthias Gods choice to replace Judas (Acts 1:15-26)? What is the identity of those sons of God referred to in Genesis 6? Are the angels of the seven churches real angels or pastors (Rev. 1:20)? Is there a so-called call to ministry (Eph. 4:11- 1 Tim.

3:1)? Is deaconess a valid church office (1 Tim. 3:11)? What is the sealing of the Holy Spirit (Eph. 1:13-14)? Is regeneration absent from the Old Testament, being a New Testament doctrine only (Isa. 57:15- Eph. 2:1)? What do other terms that appear in Scripture mean, such as: fall away (Heb. 6:4-6), old man (Rom. 6:6), and new creature (2 Cor. 5:17)? One of several endorsements: Dr. Watson has undertaken a project that would make most men tremble: he has studied and explained some of the most daunting passages of Scripture, and then has demonstrated the courage to publish his explanations for all of the theologians of Christendom to evaluate and contest!

He has done so with re-markable care and thoroughness, and you will profit by reading the outcomes and learning from his methods. (Dr. James Maxwell, President, Faith Baptist College and Seminary, Ankeny, Iowa) About the Author: The author entered full-time Christian ministry in 1974, serving in several capacities, including 29 years in the pastorate, as well as now speaking at Bible Conferences and other venues.